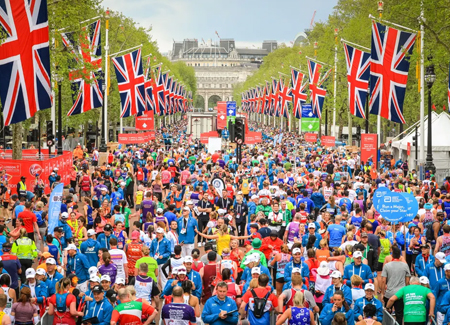 A shock on the men’s side, business as usual on the women’s.

Yesterday morning I watched the champion of champions having difficulty in the wet and cold London conditions which didn’t help the average pace of the race.

Last year’s winner and world record holder Kipchoge was having a bad day. All athletes have them but he was having a very bad day. With a blocked left ear (this destroys a good balance), cramping in hip and leg he didn’t seem rhythmical with his stride and others saw this and exploited it.

Although he came home in an incredible 8th place, considering how he was suffering, the race surged and went on ahead with the injection of pace being made by the eventual winner, Shura Kitata.

Earlier this year on the 19th January 2020, Kitata won the half marathon in Houston in 59:47. His exploits last year also showed his potential, with a 4th place in last year’s London Marathon in 2:05:01 and 5th in the New York Marathon last November 2:10:31, which was also run in very bad conditions. It seems he fairs a lot better than is compatriots in difficult conditions!

In the later stages of the race today when Kitata surged he took with him Vicent Kipchumba and Sisay Lemma who train with Kenenisa Bekele whom couldn’t race today due to an injury he picked up on Friday while training. They stayed together for the last two laps of the race until the final 400m where Kitata made a final surge and won by one second.  Kipchumba came in 2nd with Sisay Lemma following in third, 3 seconds later. I can’t remember when we had such an incredible finish to a Marathon rac!

As for the women’s London Marathon there was no such surprises and Kosgei went clear on mile 18 from Ruth Chepngetich to stride to victory in 2:18:58; 3 minutes and 3 seconds ahead of USA´s Sara Hall with Chepngetich coming in 3rd.

I was happy that Ruth managed to hold her own in the closing stages as her splits were going the opposite way and it must have been really challenging psychologically after mile 18 when she saw the surge from eventual winner Kosgei. Never an easy thing to re-focus again while running on your own.

On the Domestic front:

It was a real shame to see both Steph Twell and Lily Partridge injured mid-way through the race and unable to finish. It’s never nice to see that and my heart goes out to them both.  All the training sacrifices and hardship one has to go through at that level to then not be able to perform fully on the day is really hard.

The UK men were a little more in luck today with both Ben Connor and Jonny Mellor qualifying for the Olympic Marathon next year with the help of pace maker Mo Farah.

Today I think the weather played its part as well as how well prepared and fresh everyone was.

What is common in a lot of endurance sport is that when you have long periods of no racing it’s easy to over train and you could see that clearly in some competitors today.

One more point I would like to make is that the prize money being 30,000 US dollars is shocking in this day and age for elite marathon runners. They all need to be paid a lot more for winning these races.  Think how much your winners of football receive, or those that win majors in golf.

Some would argue trying and then succeeding to win the London marathon is one of the hardest things to try and achieve.  If anyone is interested why don´t you try running on a treadmill at 20 KPH for 2 hrs and see how you get on.

Are you ready to make a change?

Why Your Diets Not Working

Download our Free PDF that will help you change your diet so it works for you.